Un-hurrying the Moment of Meeting: Three Years On 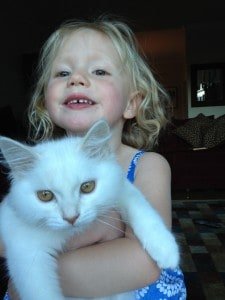 “What’s inside an eye?” My daughter turns three today and this was her question that started our day. Then, as we walked to nursery school, she asked, “When Halloween goes, where does it go?” I’m still working on an explanation for the spiraling movement of time and the effort is helping me understand why my daughter talks so often about what she will do when she is a baby again. If Halloween will return next year, why not her babyhood?

When I think back to her babyhood, what returns for me is the sweet pleasure of first meeting my little girl on the outside. The moment was unhurried. I had the space to see and the time to discover my just-born child; it was a slow meeting, slow enough for me to be present for the arrival of this brand new person. What was different from my other children’s births was that my midwife, Valeriana Pasqua-Masback, did not hand me my baby, as the midwives had done at the births of my sons. Instead, she simply guided my daughter onto the bed below me. Valeriana left the moment of meeting to my daughter and me. The experience was joyful beyond what I had imagined. The labor that got me to that point, however, was not so joyful.

My boys’ labors had been exquisite. Raw and intense, the boys’ labors had blasted from beginning to end, and surrender was every bit as spiritual as it was physical. Sarah Buckley, in her book Gentle Birth, Gentle Mothering, reports on her yoga teacher’s belief that giving birth is equivalent to seven years of meditation. The idea had the ring of truth for me. With each of my son’s labors, I felt I had traveled to the fiery core of life itself and returned with a strong, centered part of myself I hadn’t known was missing. I still feel it in my bones to this day. My daughter’s labor, however, was more “seven years” than “meditation.”

Labor started with a rock-steady rhythm and the team gathered. But then, with my home full of family and doulas and midwife, all of us poised for this long-awaited baby, labor slowed, becoming choppy and unpredictable. In the long rest following each contraction, I’d feel certain I’d been set adrift and would not see another contraction for the duration of the labor, until a title wave would hit.

Again and again, I had to choose each whopper of a wave after too long left alone by my labor. Surrender wasn’t sweet.

Really, the only problem was my mind. The expansive down-time between contractions had me too much in my head. Thoughts would float up: Is my midwife getting worried? Will my doula be too long away from her family? Will I have to transfer? This last thought was followed by an idea that had never once occurred to me in my career as a laboring woman: At least I will get a break if we go to the hospital….

Then there was the next dreary November morning I woke to, still in labor, after expecting the baby to have arrived in the night. Both my boys were born in June – a happy, sunny month with summer at the door. My own birthday month. Now it was cold, cloudy, and damp. It felt more like the dark days of winter than the crisp days of fall.

But I labored on and on and eventually reached shore. Finally (finally!) my water broke and the force I knew from my sons’ births returned. An hour later an unbelievable urge to push gripped my body and, with a force beyond anything I had ever known, my third child was born.

Here is how I met my daughter:

I was on my bed on all fours heaving with a force that matched the violence of the vomiting I’d done earlier in the labor. I remember listening as though from a distance to my own screams (I did not scream when my sons were born). I suddenly felt my baby travel down my birth canal in all of four seconds. Valeriana murmured, “Whoa… slow down…” (Odent’s “fetal ejection reflex?” I’m hoping it sounds better in French, but I think that’s what was happening). Then everything was silent…

…Squish of a baby…

…A glimpse of a baby, my baby, in Val’s hands, traveling in space toward my bed…

Val had placed this brand new being down on my bed and no one told anyone what to do. My baby lay before me at long last and everything shifted to an expansive realm of pure, visceral experience beyond the reach of language: her chubby little self before me at long last, purple, crying and kicking into space for the first time. Touching her face. Touching her. Welcoming her. Seeing tiny, wet orange-y hairs standing on end. Running my hands over her again and again. Feeling her cord pulse. Greeting her with every fiber of my being.

For a sweet minute or two, my daughter and I inhabited a place whose existence I had only first heard tell of and glimpsed a few years before, a resting space that followed her exit from my body and preceded our first embrace. Time for her and me to be together, as our little raft glided into port, landing finally on the other side of birth. And, finally, when I was ready to hold her for the first time, I picked up my daughter, as complete as I’ve ever been.

The gift of meeting my third child in this way was the potency of the visual. I had no idea that being above her, with her below me, being able to really see my daughter, would feel so powerful. I think I now understand what we mean when we talk about imprinting at birth.

Meeting my boys as they were born was deeply moving as well, but different senses were in play and the sequence of events was different, too. At the moment each son was born, he was placed directly on my chest, undoubtedly a good, warm, place to land. I recall the astoundingly tender, wet, warmth of each of their newly hatched bodies on my body. But I couldn’t really see either of them particularly well until later when I was sitting up. I also remember feeling a sense of shock that I suspect was due to finishing the momentous effort of birth and receiving my baby on my chest almost simultaneously. I couldn’t quite catch up to the moment.

When a baby is guided down at birth, the mother is allowed to set the pace of turn-around from baby birthing to baby welcoming. And some women seem to need a bit of time. “She has just done a huge piece of work!” midwife Karen Strange says emphatically. “She has just gotten this(hands showing the size of a newborn), through this (hands showing the size of the birth canal at rest). She might just need a minute!” Karen suggests that allowing for a pause, a slowing of the moment of birth (no matter how this pause happens), gives women the time and space to integrate the work they have just done (labor and birth!) so that, when they are ready, they can turn their full attention to the next thing: the unhurried meeting, welcoming and snuggling in of this baby.

In my doula practice, I’ve seen that some women won’t linger long in the space of this pause, but move quickly to pick up their babies. If a midwife guides a baby down and a woman, seeing her baby before her, feels the impulse — for any reason — to grab her baby up as quickly as she can and hold that baby as tightly as she needs, this strikes me as a profoundly important claiming of that baby, and herself as mother of that child. I have seen this be particularly healing for women who whose previous child was taken from her at birth to a warmer or the NICU.

Meeting my daughter as I did, and witnessing women and babies meeting each other at birth as I do, remarkably, the quick pass of a baby to his mother at the moment of birth has come to seem like something of an intervention. It is unquestionably a good, loving gesture that says, “This baby belongs to you. Here is your child.” But perhaps we can trust birth even further, and trust the women who have grown and birthed these babies to say in whatever way they need to express it, “This baby belongs to me. Here is my child. I will see and touch and greet and gather in my child exactly as I need to.” Perhaps we have been skipping over something that we would never know was there if we didn’t try things a little differently.

When I put my daughter down for her nap today, she asked, “What is after the sky?” Then, a few minutes later, she wondered, “What holds up a forehead?” Very human questions, indeed. Isn’t this what we do? We wonder what is beyond, behind, under, between. Here’s to midwives who are exploring what may lie after the mighty work of birthing a baby and before the first embrace that launches the even mightier work of raising a child. Here’s to midwives who are leaving it to women and their Nevie umbrellanewly-born babies to make the discoveries. My deepest thanks to Val and Karen, midwives whose questions would rival those of any three-year-old.

My daughter – awake now and cuddled in my arms as I sit at my computer on the day of her birth three years ago — just said, “When I was born I was excited about…” she trails off, deep in thought. “Yes?” I asked with curiosity. “I was excited about pizza! ” Who says children don’t remember their births? But that, I suppose, is another topic for another day…

Mary Esther Malloy is a New York City-based doula, Bradley childbirth educator, and birth counselor who leads new mom talk groups and facilitates “Healthy Birth Choices” workshops for Choices in Childbirth. She holds a B.A. from Oberlin College and a M.A. in Anthropology from New York University. She invites you to her website www.mindfulbirthny.com and her blog www.thebirthpause.com for more about slowing it all down at the moment of meeting.