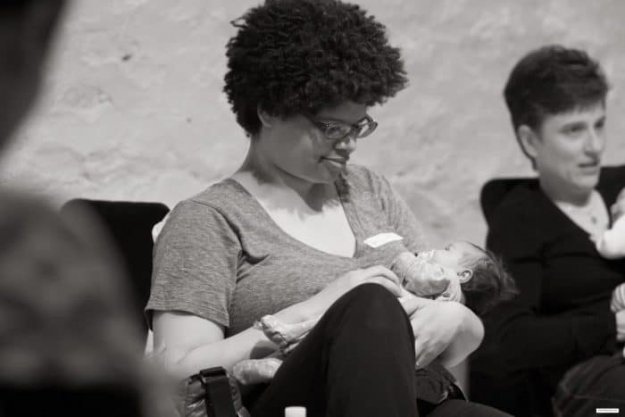 Patricia (left) and April (right) when their daughters were still babes-in arms in our Moms Group. Photo by Melody Moore Photography

Nine days after she gave birth, April and her newly born daughter joined my moms group.

Her daughter is now two-and-a-half years old. As expected, she has the strong opinions and big feelings that parents of any toddler will recognize. April and her friend, Patricia, were recently discussing their toddlers’ epic resistance to mom’s best laid plans. They decided to reach out to me about doing a workshop on setting limits with toddlers.

As it happened, on the day of the workshop I was coming off back-to-back births as a doula –  more or less 24 hours ON with two different families. With gratitude that I wasn’t solely responsible for the evening’s theory talk, I made my way to beloved Bread and Yoga and a roomful of parents of toddlers.

We opened the evening and I asked everyone to share a memory from their own childhood of “warm authority.”

April held the line. She was not permissive. The lights were going off. And yet she hung in close with her daughter’s feelings about the limit.  The opportunity to cry her way through an upset shifted something for April’s daughter: perhaps a fear of the dark, maybe tension around sleeping alone, or possibly some accumulated upset from a day in the life of a toddler – who really knows? The point is that April gave her daughter a chance to work through big, upsetting feelings by holding a limit and offering warm attention.

It is my experience that when we can offer our children this kind of limit-setting, it is a gift. We are rewarded with increased closeness and the pleasure of helping our children move through their hardest feelings.

But, you say, it is wildly challenging for parents to handle all this intensity! You are right. Toddlerhood is the time many parents lose track of the best self they thought they’d always be with their children. With the strain of long work days, seemingly endless days alone with young children, a lack time for self-care and the company of fellow parents, our reserves for our children’s struggles can be distressingly low. Let’s be honest, if you have a toddler, you know a lot about big emotions: theirs, of course, but yours too.

For parents to set limits with this kind of loving attention, we need to refill the tank of our own well-being. We, too, need to be listened to. And this is what I’ve been attempting to do for the past decade and a half with my moms groups: create community for new parents to share their biggest feelings about the work of parenting and – because it informs so much – what it was like to be a young person themselves.

We closed the workshop by listening to each other, putting our theory to the test. The moms present talked, cried, laughed, ranted, and confessed. It was a moving go-around of good people wanting the best for themselves and their families, relieved of the burden of isolation for a few hours.

Exhausted as I was coming off two births, I was immensely grateful April and Patricia had gathered the troops. I believe we all deepened the well of parenting reserves as we headed back to the delights and challenges of family life. — Mary Esther Malloy