Finally, it is over. I am going to meet my baby. My eyes sting with sweet tears as they wheel me towards the operating room. I never thought I would feel this light again. After three years of infertility, in 15 minutes I will meet my son.

I became an actress but couldn’t find true love. So at age 36, when it was clear my girlfriend and I were breaking up, I knew it was time. I was terrified to do it alone, but even more terrified I would miss my window, and never get to do it at all. Also, my stepfather had recently passed and there’s something about losing a parent that reminds you of your own mortality. There was a hole in the fabric of my family and I wanted to fill it with new life. If my life were a play, this was my cue.

I thought I was so smart, starting at age 36. But already, it was too late for my own eggs. After several attempts, miscarriages, and IVF’s, it finally worked with my first donor egg attempt. When they showed me a photo of the embryo hatching at only 5 days old, I knew this was the one. He was bursting with so much life, so much passion. It was as if he was saying, “I have been waiting for you! What took you so long to use a donor egg? I needed a strong body to be born into!”

The first trimester I was exhausted. The second trimester was hilarious. I was so invigorated I went on a trip to Europe and had many adventures. The third trimester I kept gaining weight. It was August and my feet swelled so much my midwives told me to lie horizontal as much as possible to encourage draining. They implied I was eating too much but I didn’t think I was and I was swimming 45 minutes almost every day. Something was off.

A week before I was due, they became worried the baby was too big. Also, he kept flipping between being head down and breech. They had me redo the gestational diabetes test. I tested positive, and they were concerned I had too much amniotic fluid. Ever since I was a teenager I imagined having a natural birth in a birthing tub. But just like the dream of starting my family with a partner, I was gonna have to let that go.

I had been lined up to give birth at a free standing birthing center, but with these new complications, I was risked out. My midwives booked me an induction in two days at their partner hospital. But within a few hours, they called me back to tell me the hospital was booked and they would have to find me another place.

I considered running home to Canada but it wasn’t that simple as I was no longer a resident and insurance wouldn’t be covered. I made dozens of calls and no one would take me last minute. Finally a midwife called me back and told me I had an appointment the next day with a doctor at a downtown hospital.

In my birthing class I had learned about all types of births, including cesareans. I had learned that there were ways to make a cesarean more humane. They called it a ‘gentle cesarean’ and it involved slowing down the process so I could experience it as a birth, and doing skin to skin in the operating room. Since I’m a planner, I had created two birthing plans – a vaginal one and a cesarean one. So thankfully, I was prepared to meet the new doctor and explain exactly what I wanted.

When I met my doctor, I knew I was going to be okay. She listened as I cried with vulnerability and fear. I went over my birthing plan and she agreed to almost all my requests. The baby was head down on that visit, so we scheduled a hospital induction.

The induction, however, was a disaster. I had a rare reaction to the cervadil where I experienced excruciating pain. I asked what pain meds I could take, and the nurse mistakenly told me there was nothing. So I suffered for six hours in a state of extreme, non-stop agony. The night nurse, thankfully, was more aware of my options. I asked for an epidural and was able to sleep for a few hours. However, when I awoke, I had still not dilated. The baby was not able to descend due to the extra fluid. He just kept bouncing around in there. After 24 hours, I was not even close to being in labor.

The next morning, my doctor was back on shift and we scheduled the c-section for three hours later. I was so relieved because at this point, I couldn’t even imagine pushing out a baby. I just wanted this to be over. No more darkness. Just light. But I was also terrified and vomited out of pure fear.

Right before surgery, my doctor did another ultrasound and the baby was breech again. He had flipped sometime in the past few hours. So even if the induction had worked, it would have been a c-section in the end. As the sun rose, so did my hope. Having a c section was definitely the right choice, and it was happening soon! Soon, I would get to meet my boy.

As they wheeled me to the operating room, I experienced a joy I hadn’t felt in years. The pain from my infertility journey vanished. The darkness from the past 24 hours disappeared. It was all going to be over in 15 minutes and the most important chapter in my life was about to begin. 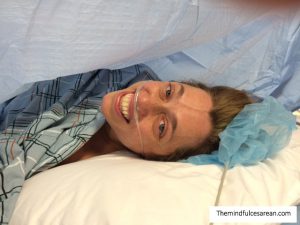 I asked to have my mother accompany me in the operating room. She sat right behind me and I could feel her presence the entire time. As my doctor operated, I could feel a tugging down below but there was absolutely no pain. It was kind of weird but neat at the same time. My doctor declared that the baby had turned AGAIN, and was now still breech, but facing the other direction. What an amazing turning baby!

As she slowly pulled him out, at my request, the anesthesiologist lowered the sheet so I could watch. He kept saying it was unhygienic to lower the sheet, but I kept reminding him that it was fine, and that my doctor had okayed it. 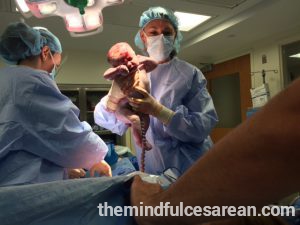 Also at my request, my doctor milked the umbilical cord for 30 seconds (as long as she felt medically comfortable doing, given my complic 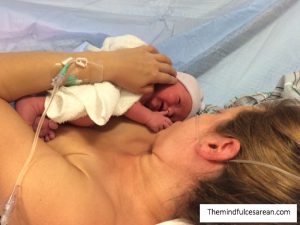 ations), so my baby would benefit from the extra blood volume. The pediatrician took my son and examined him as he let out a heartfelt cry. I watched, and after a few minutes, I could tell that the pediatrician was done with his procedures, so I asked if they could place him on me for skin to skin. Although the pediatrician had been prepped that this was the plan, he looked dumbfounded and said, “I’ve never done skin on skin in the operating room.”  My doctor stated confidently, “That’s what we’re doing!” The nurse piped in, “I have!” and whisked my son from the doctor and placed him on my chest. 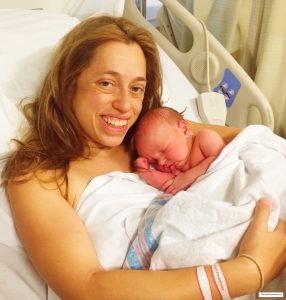 After all I had been through to get pregnant, I always pictured melodramatically breaking down in tears and completely losing it when I finally got my baby. Instead I surprised myself by feeling completely calm and level-headed. “Hi,” I smiled at the little life rooting around on my chest. “I’m your mom. I’m the one who gets to take care of you. We are going to have so much fun. We will go to the park, play music, go to museums…” At one point I broke out singing “You are my sunshine” and after a verse my mother spontaneous joined in, in perfect harmony. After a few verses, my son Phoenix found my breast. It had only taken him 15 minutes to latch.

The post-partum in the hospital was actually a very good experience. I loved being waited on hand and foot as I held my son and nursed him constantly. Although we weren’t allowed to bed share in the hospital, when the nurse left my room, I’d lift him back in bed with me and hold him for most of the night.

I didn’t get the natural birth I had always envisioned but I am proud to say that breastfeeding is going great for us. My milk came in on day two, he regained his birth weight in three days, and he is now five months old and we are still exclusively breastfeeding. I had minor difficulties like some imperfect latches at the beginning, a little pain, and over-supply, but in general my boobs have been major milk machines! I adore the feeling of breastfeeding and the bond it nurtures between us. I am also proud of my choice to bed share. I love snuggling with him all night. I don’t mind feeding him in the night because we are both half asleep when he nurses. He’s a great sleeper and I think it has something to do with the fact that he knows I am always there for him, even in the night. He is so strong, so passionate and growing so perfectly. I might not have gotten the natural birth that I wanted, but I am getting to be the natural mama I always longed to be and that is so much more important. 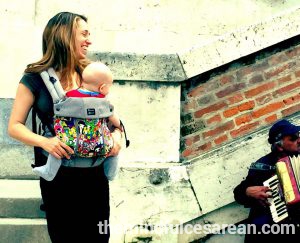